Construction workers losing their jobs in the wake of Carillion’s collapse should not be out of work for long as there is new evidence today of skills shortages in the industry reaching an all-time high.

The number of firms reporting difficulties hiring plumbers and electricians has reached 48%, plasterers 46% and floorers 30% – all numbers representing a new high, the FMB said. Recruitment problems are here despite a downturn in optimism in the sector. Fewer master builders predict rising workloads in the coming three months, down from 41% in the third quarter of 2017 to 38% in Q4. They are also resigned to spiralling costs: 87% of builders believe that material prices will rise in the next six months, up from 82% in the previous quarter; and 61% expect salaries and wages to increase in the next six months. 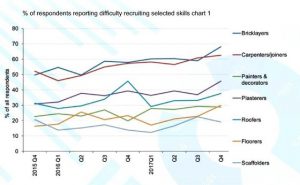 FMB chief executive Brian Berry said: “Skills shortages are sky rocketing and it begs the question, who will build the new homes and infrastructure projects the government is crying out for. The government has set itself an ambitious target to build 300,000 homes every year in England alone. More than two-thirds of construction SMEs are struggling to hire bricklayers which is one of the key trades in the building industry. This has increased by nearly 10% in just three months which points to a rapid worsening of an already dire situation. What’s more, nearly as many are facing difficulties hiring carpenters and joiners. These figures are the highest we’ve noted since records began a decade ago. As a result, the wages for these increasingly scarce skilled tradespeople continue to rise sharply; that’s a simple consequence of supply and demand. This, coupled with the fact that small construction firms continue to face significant material price increases, will inevitably squeeze their margins and put a brake on growth.”

Mr Berry continued: “The government must take account of the worsening construction skills shortage with Brexit looming large on the horizon. The prime minister must ensure that the immigration system that replaces the free movement of people can take account of the particular needs of key sectors such as construction and house building. Without skilled labour from the EU, the skills shortages we face would be considerably worse, and it is not in anyone’s best interest to pull the rug out from under the sector by introducing an inflexible and unresponsive immigration system. On the domestic front and in the longer term, to ensure we have an ample supply of skilled workers in the future, the government must continue to work with industry to set the right framework in terms of T-Levels and apprenticeships.”

He concluded: “The silver lining to current skills shortages among construction SMEs is that the numerous tradespeople and professionals, who may find themselves out of work following the collapse of Carillion, have a ready supply of alternative employers.”